Then…I’d have just enough breath left to tell you that the route is a steep uphill climb, but the view is most definitely worth the effort.*

So what is a Miradouro and why are they all over Lisbon?

Rough translation – it’s a viewpoint. Basically, it’s a pretty terrace specially built to let you sit, rest and take in the whole city (or most of it anyway).

As any Lisbon guidebook will tell you, Lisbon was built on seven hills.  And the higgledy-piggledy layout of the city lends itself to around thirteen of these “miradouros”. 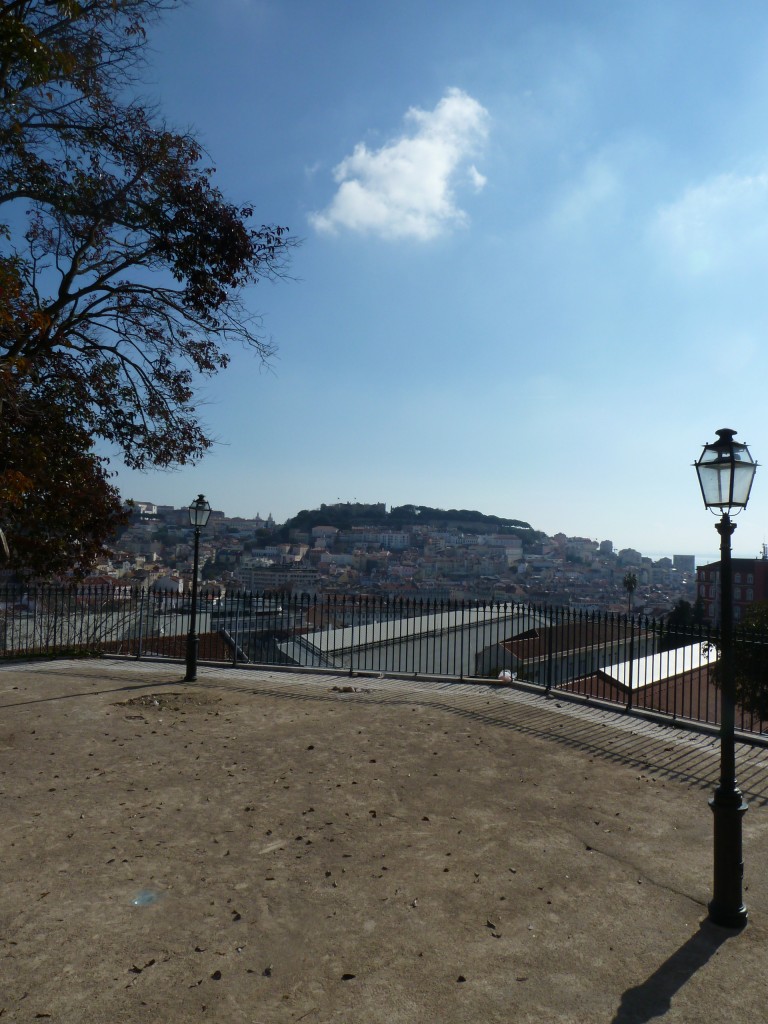 Miradouro de Sao Pedro de Alcantara is an oasis of calm during the day, but the fact that it is located close to Bairro Alto, aka Lisbon’s party central, means that it completely transforms at night.  While during daylight hours, old men sit and paint canvasses of Lisbon, at night shiny,happy revellers watch night turn to day over a cheap beer and other things.

The view of St. George’s Castle from Miradouro de Sao Pedro de Alcantara is especially impressive, making it a great little pitstop if you’re wandering around some of the highest streets in Lisbon.

View of the Castle and Rooftops

What other Miradouros are worth visiting in Lisbon?

Night or day, this is one of the prettiest places in the city. Look out for Alfama’s terracotta rooftops, as well as towers and domes tumbling down towards the Tagus. 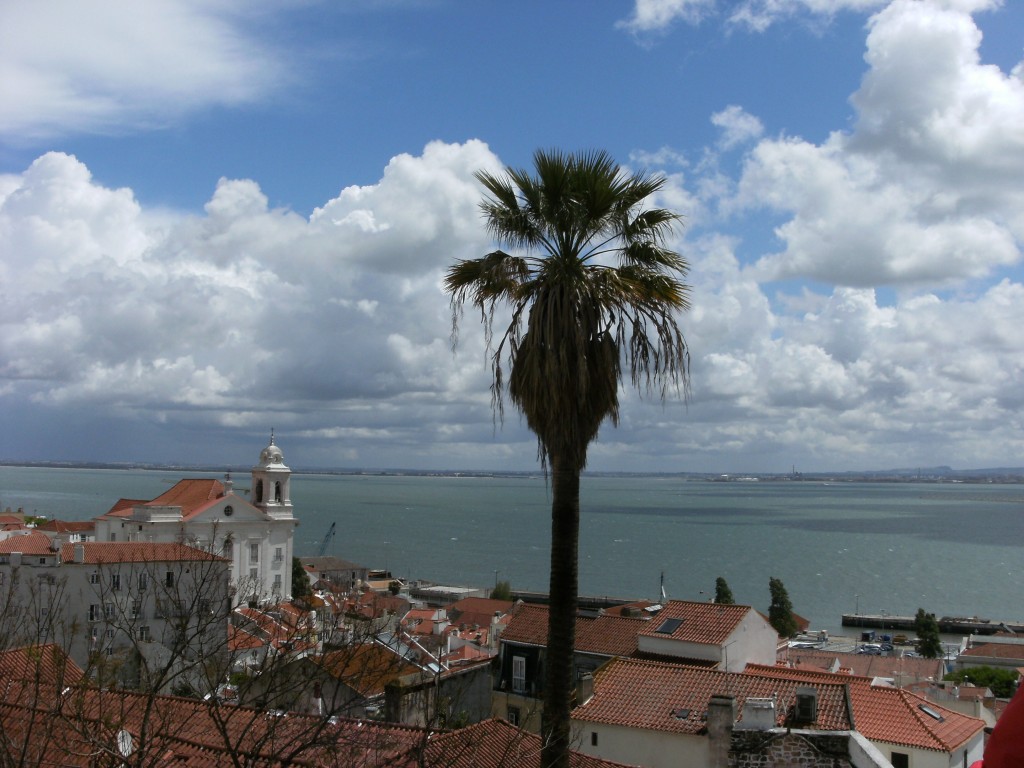 The small entrance fee to the grounds of St George’s castle is definitely worth paying to see the panoramic view of the cities cobbled squares, twinkling blue Tagus and 25 de Abril bridge. 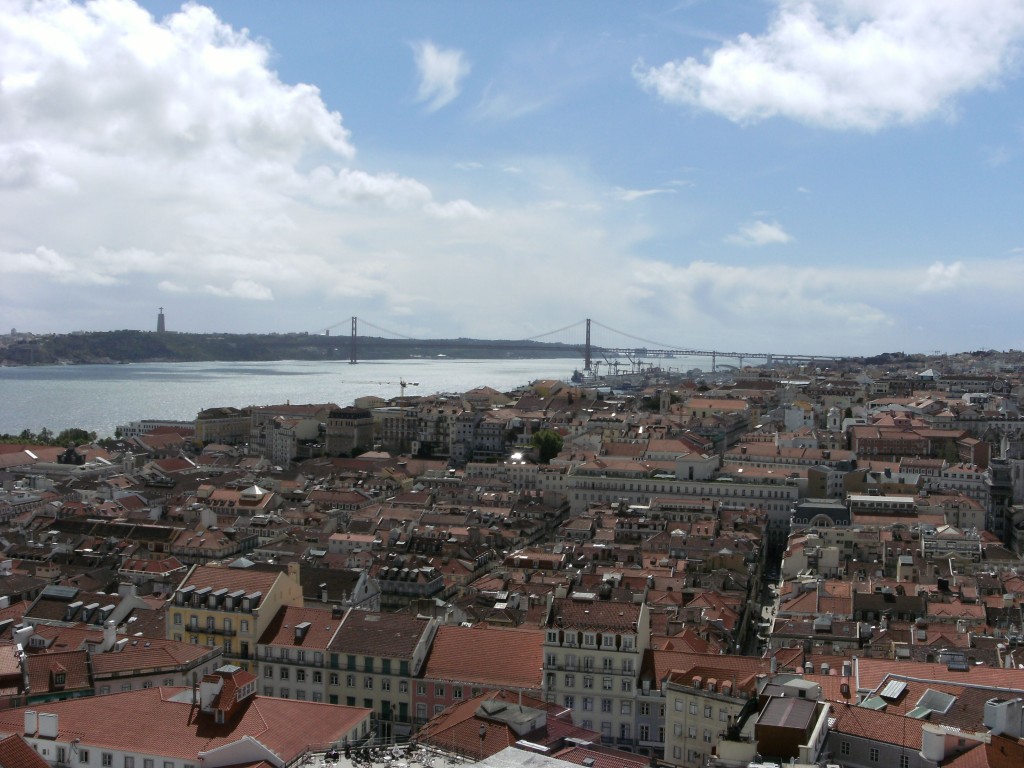 Some of the city’s best sunsets are captured here, as well as stunning views of the castle and virtually the whole city.

Alfama’s rooftops, the Tagus and the dome of the National Pantheon are just some of the features you’ll spot from this view point.

This is a cool, shady spot that is perfect for a late afternoon visit. There are fine views to the castle as well as cafés where you can sit and chill.

This  fully-working street elevator dates back to the beginning of the 20th century and is a truly beautiful example of civic engineering. At its feet is Rossio Square, but once you’re at the top you’ll have uninterrupted views of the castle as well as the option of checking out the ruins of the Carmo church.

Take a tram to Belem and climb to the top of this iconic landmark. Views of Belem and the Tagus are stunning.

Overlooking the 25 de Abril bridge, the views from this monument are truly stunning.

Despite the fact that this is one of Lisbon’s least visited miradouros, it offers wonderful views of the Tagus as well as Alfama.

This much visited Miradouro is sometimes called ‘Adamastor’ , a reference to the towering stone statue of the mythical figure of the same name which overlooks the space. Adamastor was famously brought to life in the poem O Lusíadas by Portuguese poet Luis de Camoes. The creature symbolised the forces of nature Portuguese navigators had to overcome during the age of discovery.

Officially though, the space is called the Miradouro de Santa Catarina. As a viewpoint it offers a stunning vista over the Tagus river as well as the 25th of April Bridge and the Cristo Rei monument.

Scale the dizzying heights of this tower named after one of Portugal’s most famous explorers and check out Parque das Nacoes and the Vasco da Gama Bridge as you’ve never seen them before.

This lush green belt is situated just off Avenida da Liberdade.  A nice view of the river can be seen from the distance.

*But if it sounds like too much hard work to get to Sao Pedro de Alcantara, take the Elevador da Gloria from Baixa (Restauradores Square) for €3.50 one way or FREE with an aerobus ticket or green Lisbon transport ticket. It’s an experience in itself! 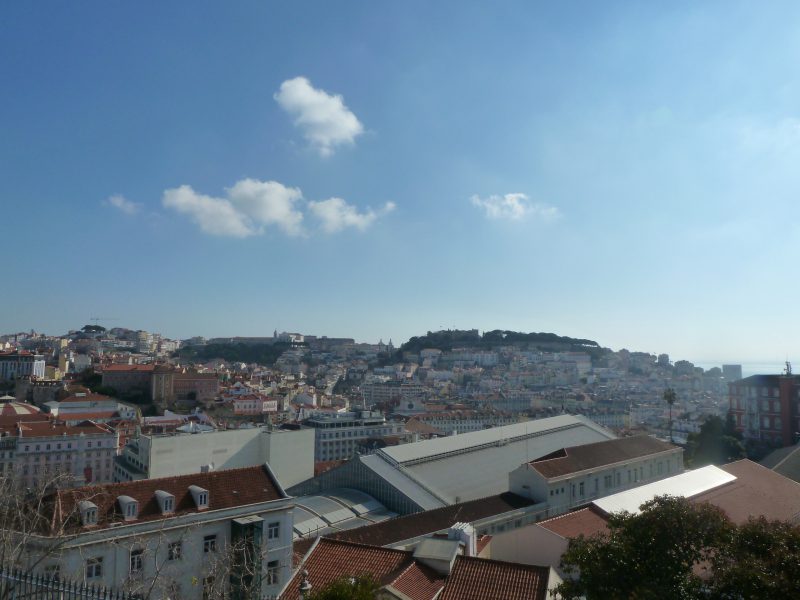