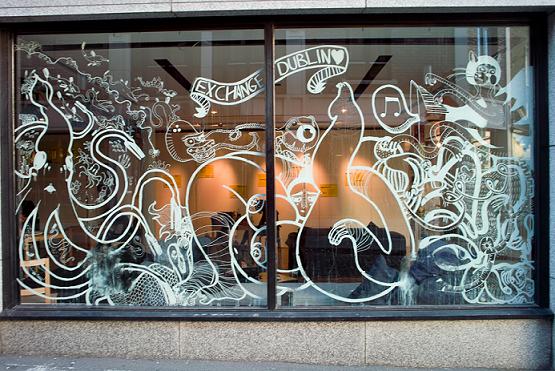 Stumbling upon Exchange in Dublin’s Temple Bar, you would be forgiven for wondering whether this is a swap shop or indeed an exciting looking bureau de change .

Funnily enough, it  is neither of these things.

Exchange Dublin is in fact a rather cool centre for collective arts projects.The centre is run voluntarily by young people and plays host to discussions, gigs, visual arts and performances. Most projects originate from a range of “Exchange Groups” that use the Dublin space as a hub for their activities. Representatives from these groups form the general Exchange Dublin Collective that plans and coordinates events in the space. Travel Edits recently caught up with one of the volunteers to find out more.

1. How did the idea for Exchange Dublin come about?

In many ways it wasn’t a new idea, it was just a bit slow finding its way to Dublin. There was a lack of sufficient space in the city for the proliferation of cultural and intellectual events, and from May 2009, Exchange Dublin set out to change that.

At the start, there were a couple of different strands meshed together. Activist arts, with Andreas Kindler von Knobloch and Jonah King, who were involved with the Office of Non-Compliance which would later run Dublin Contemporary in 2011, as well as other NCAD students – like Roisin Beirne, who is now working in Block T. Music – all-ages, in the original idea, though in practice it was mainly students – was another, with Stephen Foy, Peter Simms, and Dylan Haskins, though other artistic and cultural pursuits were represented in the group too. Later in 2009, they organised ‘Culture and the City: the debate’ for Temple Bar Cultural Trust – a masked debate about culture in Dublin at Meeting House Square in Temple Bar. The debate focused on the question ‘Is this city fit for purpose?’. Later still in 2009, Exchange collaborated with a group of NCAD students called ‘Office of Public Works’ to organize ‘Change?’, a week of film, open exhibitions and discourse on the notion of societal change that involved photographers, secondary school students and members of the public in Project Arts Centre, who managed Exchange until November 2011in their Catalyst partnership scheme. However, all decision making around programming and events is and always has been carried out entirely independently by the collective, which became an independent co-operative on November 23rd 2011 and was awarded charitable status on June 7th 2012! To find out more, just drop in or send an email to info@exchangedublin.ie

2. What’s the best thing about your location in Temple Bar?

Exchanges are the point or act of transferring something, so being central is the best way to be as accessible to as many people and their ideas and projects as possible. Centrality brings problems too – the risks of being too cultural in the cultural quarter when most other venues open in the evenings sell alcohol. Open, visible, glass walls keep us honest and let people see what we’re up to and hopefully it interests, intrigues or entertains them. And we just look different to passers-by – there’s an instantly recognized architectural incongruity beside the other establishments in the area.

3. In your opinion, what sets Dublin apart creatively from any other city in the world?

Lack of funding. Derision of the arts. Paddy Casey.

A little more seriously, Dublin – like Exchange – is what you and I and we make of it. 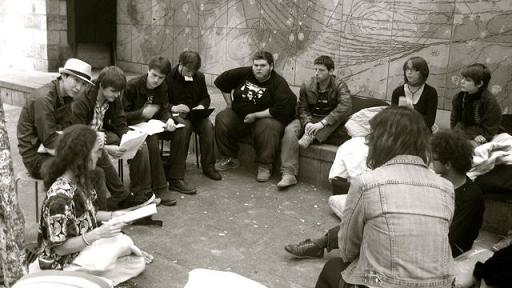 4. What are the three most memorable events that Exchange has hosted so far? Why?

Japanese horse performance art, surrealist Icelandic politicians from the Best Party and intimate acoustic sets from bands like “The Souterrain” (who were the first gig in Exchange). Do we really need to explain why…?

​Different events and moments are memorable for different reasons to different people, and Exchange is a place that embraces those differences. 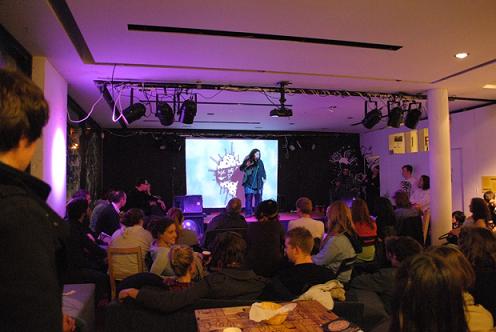 5. The Dublin Exchange is famous for its lovely tea – what’s the secret behind it?

Wait, it’s famous…? Where?! Possibly because it’s free…? The secret ingredients are something we are currently trying to patent, but it’s clearly an addictive mind-altering addictive substance. The substance might be revolution (by the way, the coffee is also excellent if not even better!).

6. If you could do a cultural exchange with any other city in Europe where would it be?

Reykjavik. They have the Best Party!

7. How do you promote upcoming events at Exchange Dublin?

Online – facebook, twitter, exchangedublin.ie and the Dublin Event Guide – a free email newsletter put together by a lovely guy called Joerg, full of really interesting free events in Dublin every week. Look it up if you’re thinking of visiting!

8. Who is Exchange Dublin open to?

9. How do people get involved with Exchange Dublin?

A lot of the time people walk in, and ask ’what is this place?’.

We admit that we’re still trying to work out the answer ourselves, and people stick around to find out their own answers.

10. What’s next for Exchange Dublin?

Loads of different, often unexpected and unpredictable things – we just open the doors and see what walks, skips, jumps or rolls in. We never know. Do you?