Ever since it opened its doors in November of last year, San Lorenzo’s has been receiving rave reviews from critics and customers. The New York style Italian neighbours the funky 777 Mexican on South Great George’s Street and is the latest venture of Chef Patron Temple Garner, recipient of the Michelin Bib Gourmand (Red M) award while at the city’s Mermaid Café and co-owner of and founder of Town Bar and Grill from 2004-2009.  More recently, he was the mastermind behind the menu of Dillinger’s in Ranelagh. So, so far so good…

Much like its fellow George’s Street buddy, 777, the feel of San Lorenzo’s is casual, but in this case, it’s minus the try-hard decor. Seating is park-bench style banquettes. Exposed overhead piping, leaded downlighters and a vivid red colour scheme complete the look. While style overtakes substance somewhat in 777, San Lorenzo’s manages to deliver both a slick menu and a friendly, efficient service. 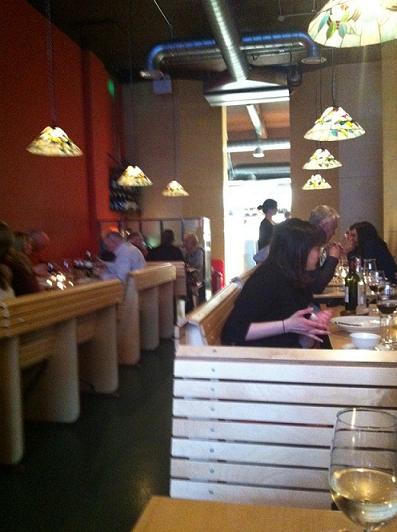 Lunch and dinner menus feature something for everyone, from typical Italian favourites to hearty fare that uses the best  in-season local produce (check out the shoulder of lamb). The wine list is carefully thought out and extensive, while Italian beers such as Moretti and Peroni offer an ice-cold alternative. The real star is the early bird/pre-theatre menu which provides exceptional value for money at €19.50 for two courses or €24.50 if you’ve got room for dessert and, with Tiramasu on the menu, who wouldn’t be tempted? My starter of Proscuitto and red wine poached pear salad with gorgonzola, rocket & balsamic was a delicious symphony of flavours. This was bettered only by the main of Zuppa de pesce; a fish & seafood stew with mussels, clams, prawns, white wine, chilli and garlic, accompanied by  char-grilled sourdough crostini. 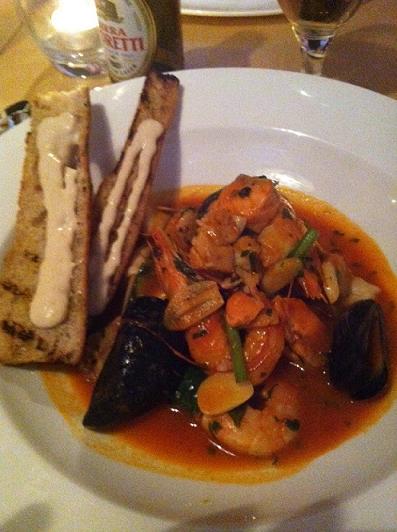 The seafood stew managed to be both light and full of taste and the crostini certainly did a good job in mopping the plate clean.  A moreish Tiramisu rounded things off perfectly.

A very welcome addition to the Dublin dining scene. San Lorenzo’s definitely deserves all the recent praise from customers and critics, so believe the hype!

How to Reach  San Lorenzo’s:C

South Great George’s Street Dublin 2 (a few doors down from 777).

*While you’re here, don’t miss the chance to take a trip to the bathroom upstairs. There’s a viewing gallery in front of the sinks that allows you to watch the culinary artists at work in the kitchen below. Unusual choice of location for a window, yes, but this transparency can only be a good thing!