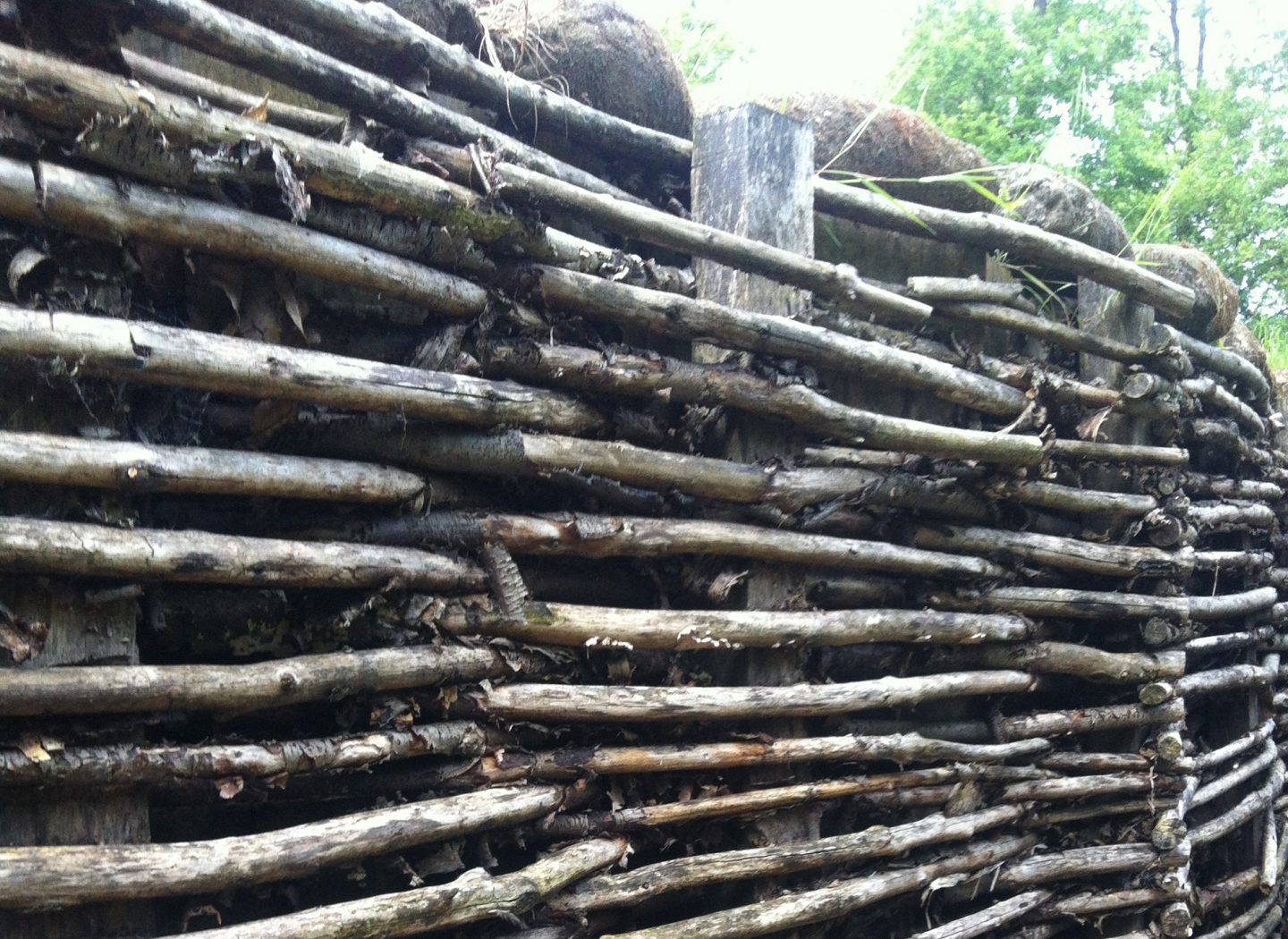 To commemorate the centenary of World War I in 2014, I joined travel bloggers from around the world in Belgium to explore some of the most significant sites from the Great War. For me, the highlight of the trip was a specially organised tour of the places where the Irish fought, died and found peace with each other.

Overshadowed by later political developments in Ireland, in particular The Easter Rising which took place in 1916, stories about the role played by Irish soldiers in World War I have been left largely untold until quite recently.

Although Ireland had a strong military tradition within the British army, dating back to the 1500s, soldiers who returned to Ireland after 1916 came back to a transformed political landscape and a hostile reception. Britain was the enemy and the returned Irish soldiers were greeted with suspicion and even contempt. 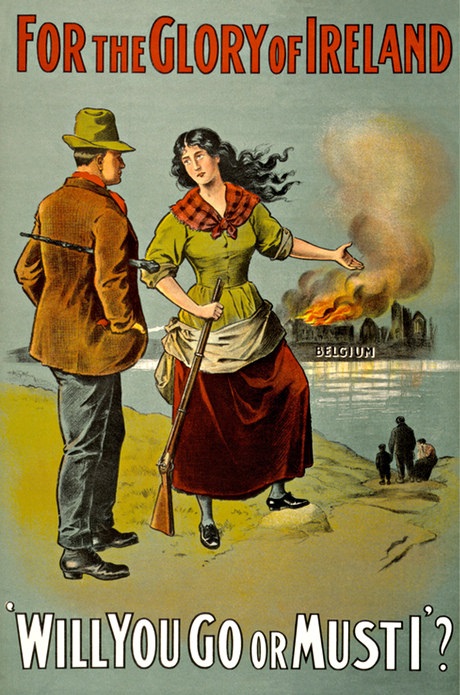 But for ordinary Irishmen who signed up to serve ‘King and Country’ in 1914, the situation was very different. Many who enlisted believed their involvement would influence the British government to grant Home Rule for Ireland as a reward for their service. Others joined in solidarity with “little Catholic Belgium”. Financial rewards were a major draw too. Ireland was poverty-stricken at the time and the British army offered an opportunity to earn a decent wage. Indeed, in 1914 there was no stigma attached to ‘taking the King’s shilling’ and joining the British army was regarded as a job like any other.

A Tour of Irish WWI Sites in Flanders

It’s a grey May afternoon and local Belgian guide Philippe Mingles is explaining how he first became interested in Irish history. As we drive through the lush green plains of Flanders fields, dark, angry clouds roll ominously across the sky. 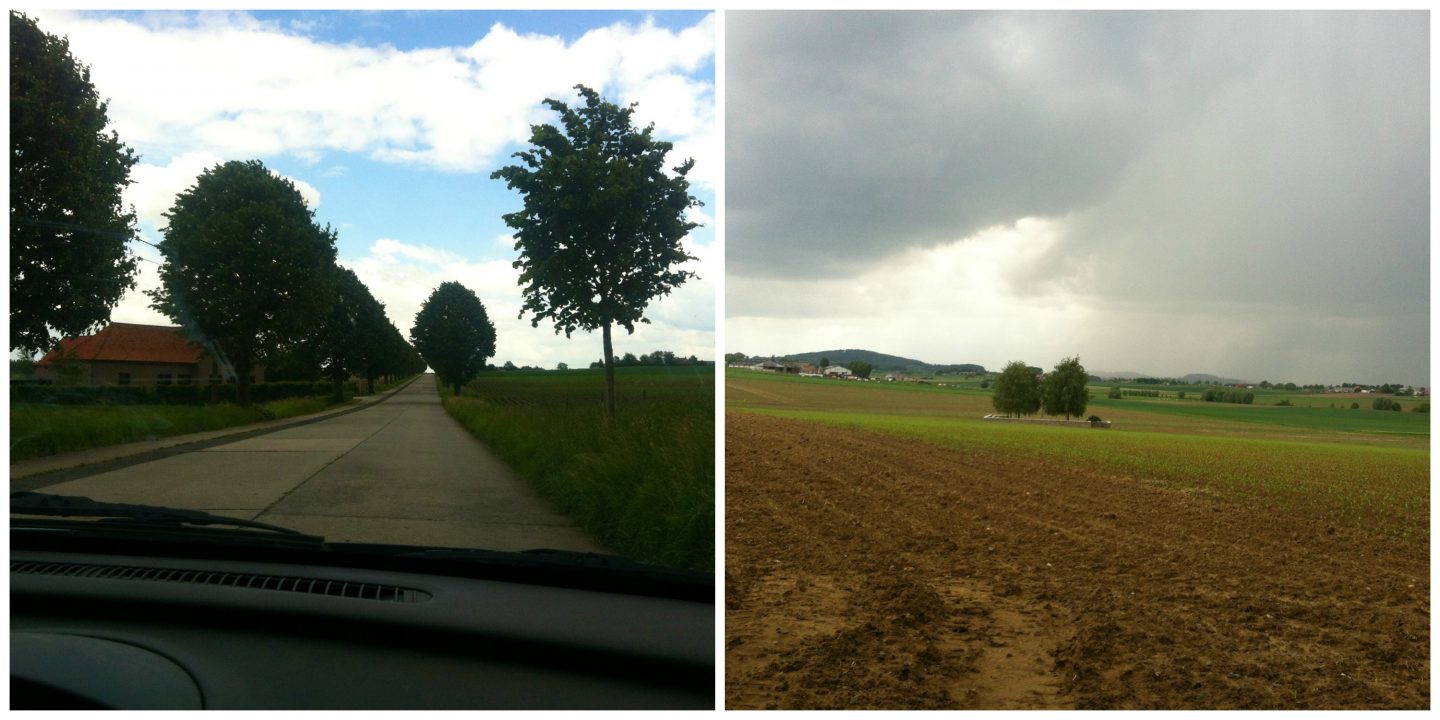 Mingels has devoted almost thirty years to researching Irish history and has taken a special interest in the role played by Irish soldiers in World War I.

His enthusiasm for this period of Irish history  led him to develop The Wijtschate Messines Ridge Experience, a tour that highlights the background history of the Irish in World War I as well as the Irish-Ulster connection during the war.

We continue along the country roads, with Mingels setting the scene – pointing out spots on the landscape that were once danger zones as well as landmarks on the horizon used by soldiers to mark their position.

First stop is a screening of the ‘Zero Hour’ documentary at a local historical centre. The short film focuses on one of the most destructive battles to occur on Belgian soil involving soldiers and miners from General Herbert Plumer’s Second Army. For 18 months, they worked underground on a plan to explode multiple mines beneath the largely unsuspecting German side. The target was the Messines Ridge, lying to the southeast of Ypres, which had been a small German stronghold since late 1914. Plumer arranged for 22 mine shafts to be laid below German lines along the ridge.  His plan was to detonate each one at zero hour, 03:10  on 7th June 1917. The man-made earthquake would be followed by lengthy infantry attacks on the Germans, supported by tanks and gas.

After watching the chilling 20-minute documentary we head back out to explore real-life WWI sites in the countryside. 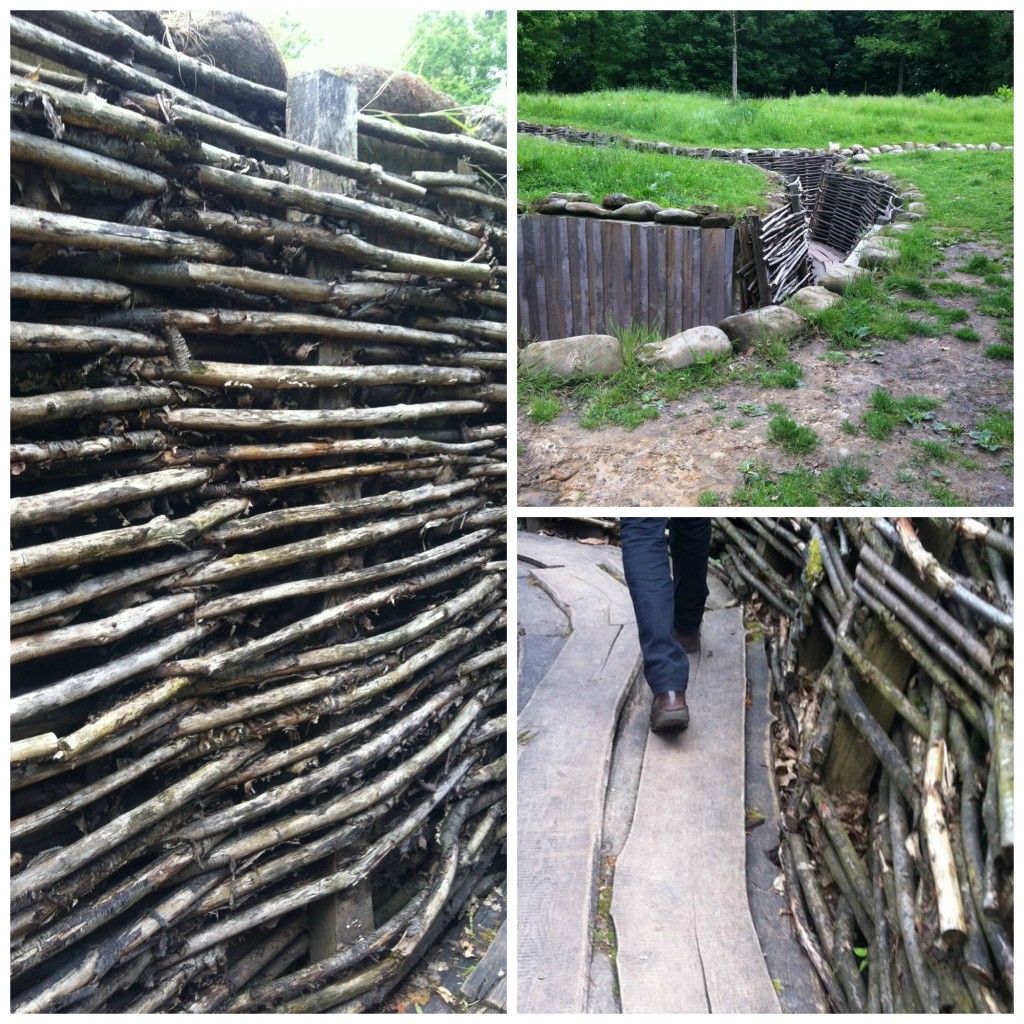 We move on to Bayernwald, located between Wijtschate and Voormezele. The painstakingly restored section of German trench system was built in 1916 in reaction to General Plumer’s tunnelling activity at Messines Ridge. Treading the narrow walkways, I could only imagine what conditions must have been like for the soldiers in winter, cramped within the fenced walls, enduring driving rain, freezing cold temperatures, sleepless nights and worse.

In these surroundings, it was easy to sympathise with the German, British and Irish soldiers who famously decided to drop their weapons on Christmas Eve in 1914. For a few moments in the Western Front trenches, the spirit of ‘live and let live’ prevailed and both sides agreed they would stop shooting at each other and held a football match on no man’s land. Far from their families and missing home comforts, they lit candles and sang Christmas songs. Sadly, the ceasefire didn’t last very long – when superiors on both sides found out they were furious. Normal trench life resumed with immediate effect.

The Irish Pillars and the Irish-Ulster Connection

Next, we stop at the Irish Pillars on Wijtschate Road – two stone pillars facing each other that commemorate the spot where the 16th (Irish) and 36th (Ulster) went into battle together at Messines Ridge. 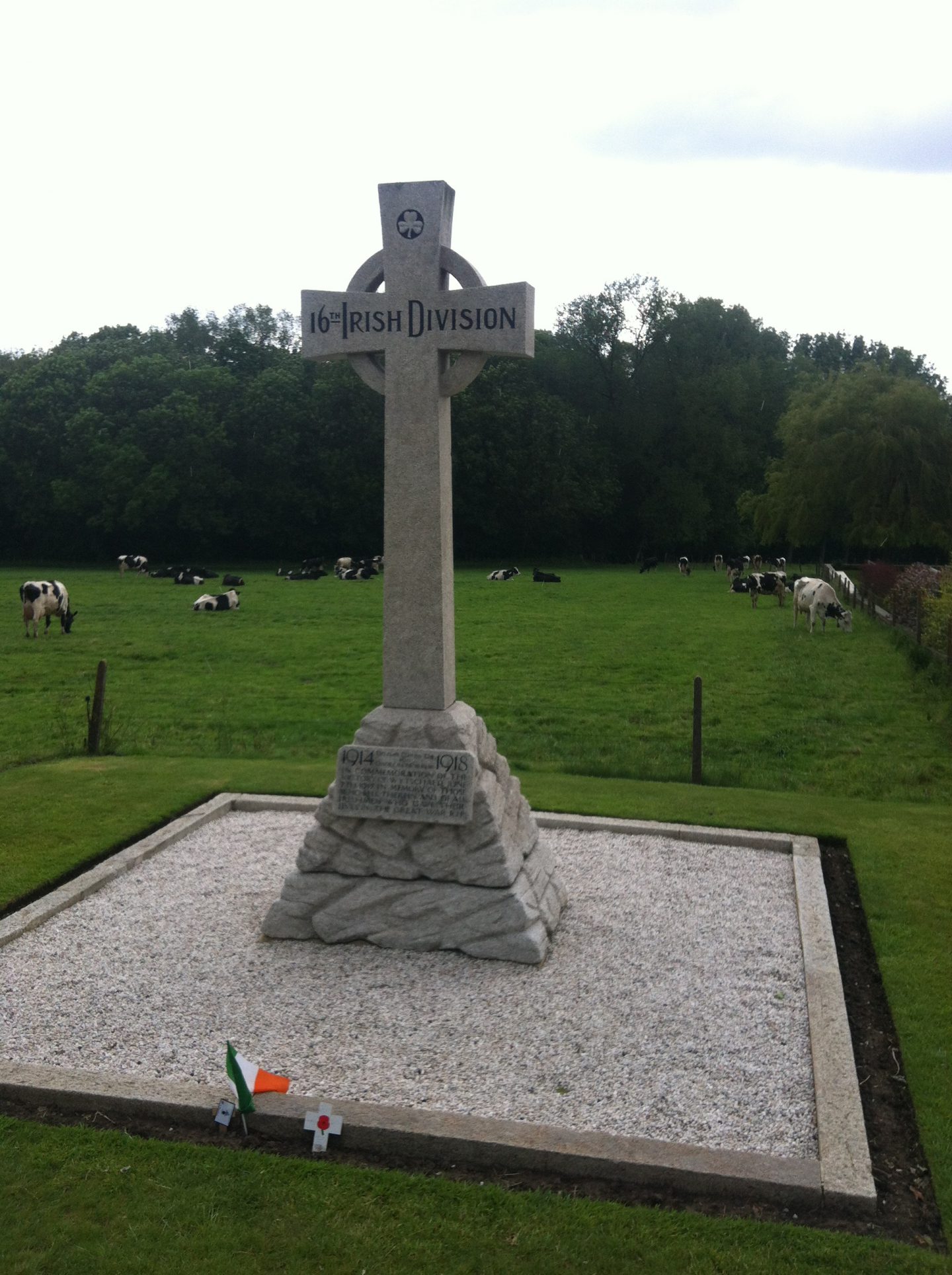 Following the devastating amount of casualties at the Somme, the 36th (Ulster) and 16th (Irish) Divisions made the decision to leave the area and move north to the relative calm of the Flanders line facing German-occupied Wijtschate.

In their move, they both became part of General Plumer’s Second Army in the summer of 1916. With the Home Rule Crisis and  Easter Rising tensions still very much raging at home, they put aside their differences to fight for freedom.  Both divisions fought side by side and played a crucial role in the dramatic attack on Messines Ridge.

Around 10,000 Germans were killed by the mine attacks. Major Willie Redmond (16th Division), M.P. and brother of John, leader of the Irish Party, died of wounds received in the explosions.

On my request (and outside of the usual tour itinerary), we move on to Poelkapelle cemetery,  to the grave of John Condon. The week I visited Flanders, there had been a lot of press in Ireland about  a new statue in Waterford dedicated to the ‘boy soldier’.  At 14 he is reputed to be the youngest casualty of World War I. I was interested to see the grave in person. Like many historians my guide is skeptical about John Condon’s story. Nevertheless, we negotiate rush-hour traffic and Mingels locates the grave just before it’s time to catch my flight back to Dublin. 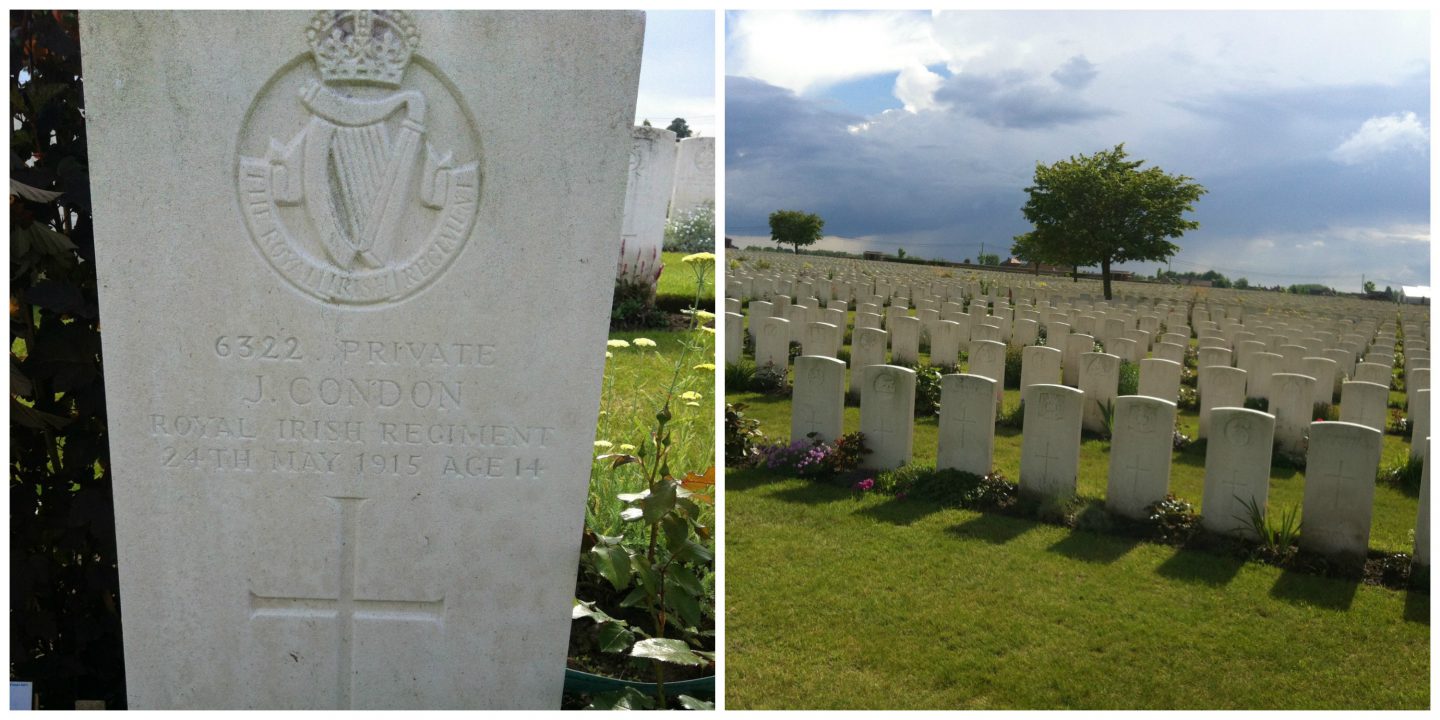 As the story goes, John Condon enlisted in the 3rd Battalion of the Royal Irish Regiment in Waterford on 24 October 1913. He falsely gave his date of birth as 24th October 1895 which would have made him eighteen. It is believed he was just twelve at the time. On the outbreak of World War I, Condon was mobilised on the 7th August. However, as he was ‘officially’ still only aged eighteen, he remained with the reserve battalion in Ireland until after his ‘official’ nineteenth birthday on 24 October, as the army had fixed the minimum age for service overseas at nineteen. Condon was killed in a gas attack in Flanders on May 24th 1915 aged 14.  His grave in Flanders is one of the most visited of all World War I graves and is regarded by many as a symbol for the futility of war.

Lasting Legacy and a Monument of Peace 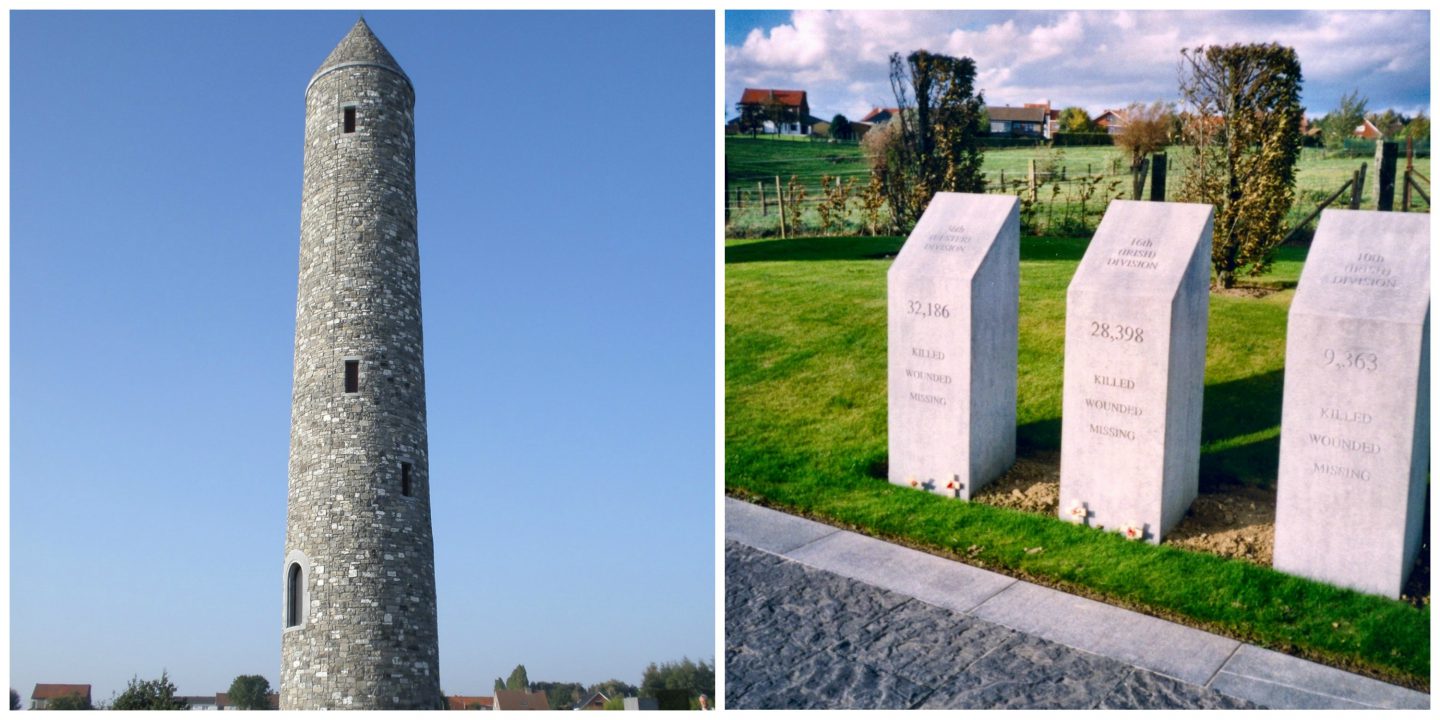 The scale of destruction and death associated with World War I was unprecedented. Of the dead, it is estimated that around 49,000 were Irishmen.

Both the Irish and Ulster divisions suffered huge casualties at Passchendaele in August 1917 and during the German spring offensive in 1918. Their actions are commemorated at the Island of Ireland Peace Park, at Messines, which was opened by President Mary McAleese and Queen Elizabeth in 1998.

The memorial site is dedicated to the soldiers of Ireland, of all political and religious beliefs, who died, were wounded or went missing between the years 1914-1918.

A 110 ft high round tower  was built as a symbol of reconciliation by the All-Ireland Journey of Reconciliation Trust, with the support of the people of Messines.  As part of the design the inside of the tower is lit up by the sun only on the 11th hour of the 11th day of the 11th month – the time when guns fell silent in 1918 after four years of war.

Taking a Tour of Irish World War I Sites in Flanders

With thanks to Visit Flanders and Philippe Mingels. 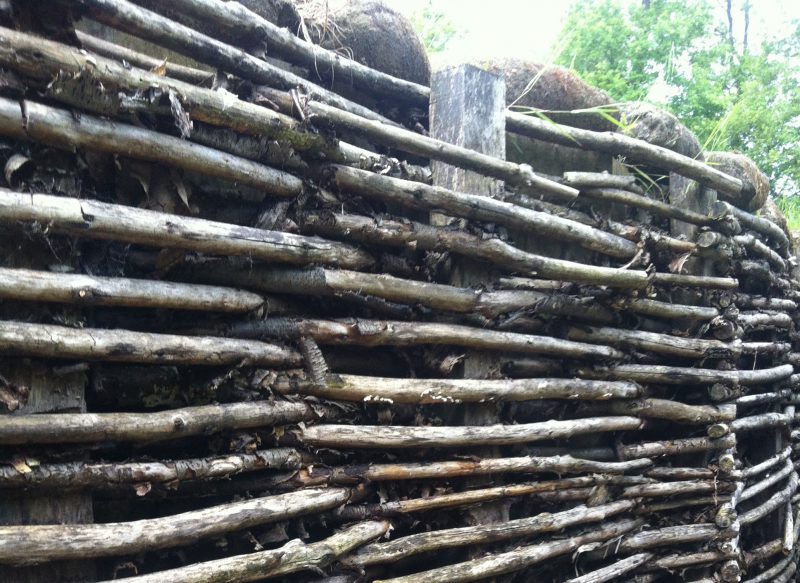