As the nights draw in, there’s nothing like a good whiskey and an open fire to warm the heart. And if there’s one city that does whiskey well it’s Dublin. Not only is it home to the Old Jameson Distillery, but many of the city’s publicans take an admirable pride in their own unique selection of whiskeys. From the cosy traditional pub to the cool late bar, the following are five of Dublin’s finest whiskey emporiums… 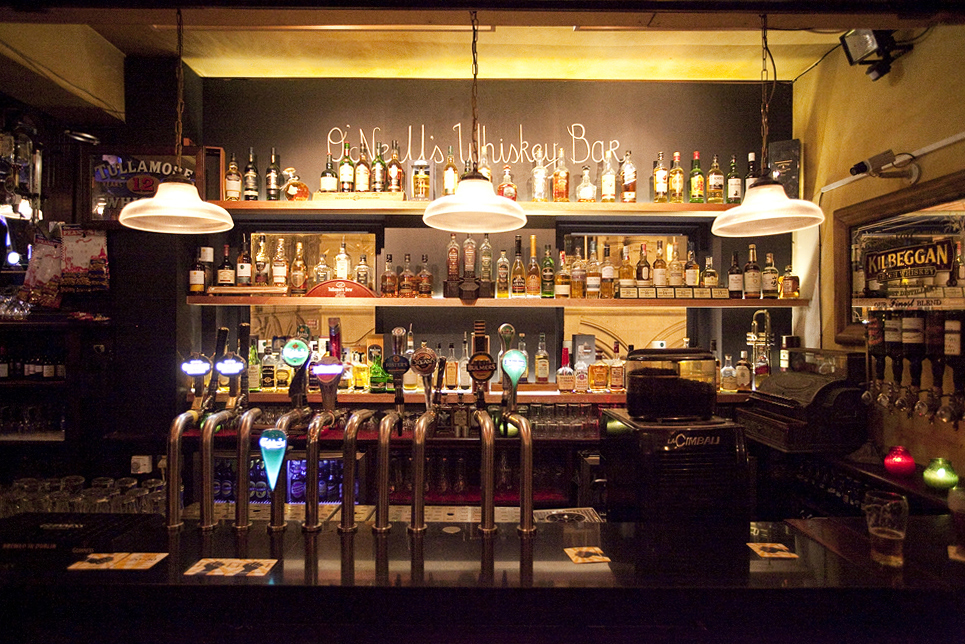 O’ Neills’ choice of whiskey is extensive and is available on two floors, downstairs in both the main bar and the smaller Victorian bar as well as the dedicated Whiskey Corner upstairs. 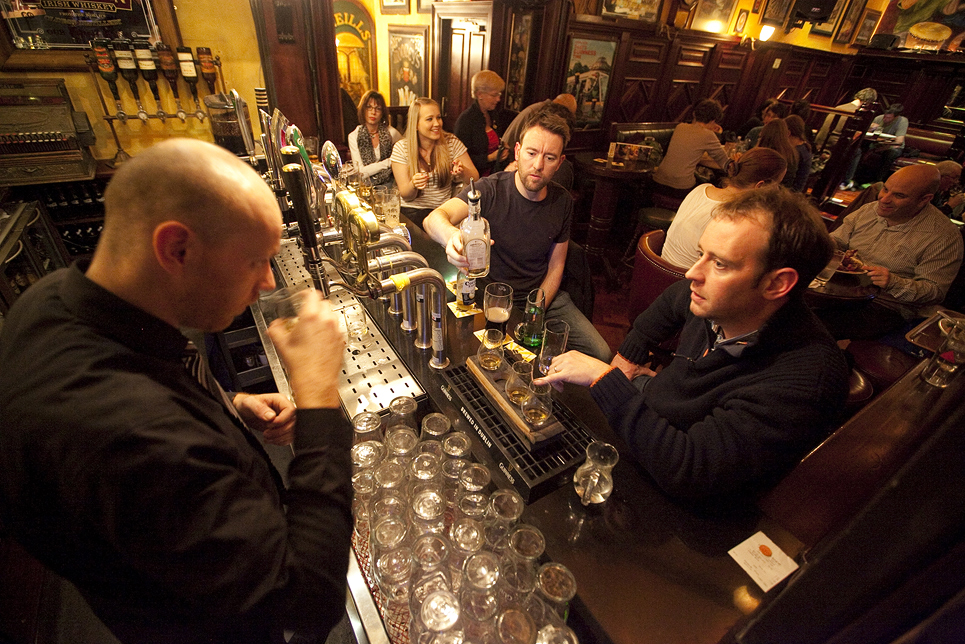 With names like ‘Writer’s Tears’, who could resist a drop, especially when the barman is as knowledgeable as Fabien? He says of the selection: “The first whiskey I ever tried was Bushmills and I’m always happy to recommend it but my favourite is Cooley.  Overall we have a great selection with peated (Connemara), single grain (Greenmore) and more exotic types such as Tyrconnell. I’m constantly keeping an eye out because the industry in Ireland is very creative right now. For those who like their whiskey neat, O’ Neill’s always uses the Glaincairn glass.  In my opinion it is a good balance between quality and elegance.” But don’t just take Fabien’s word for it, pop in the next time you’re in the area and try for yourself. 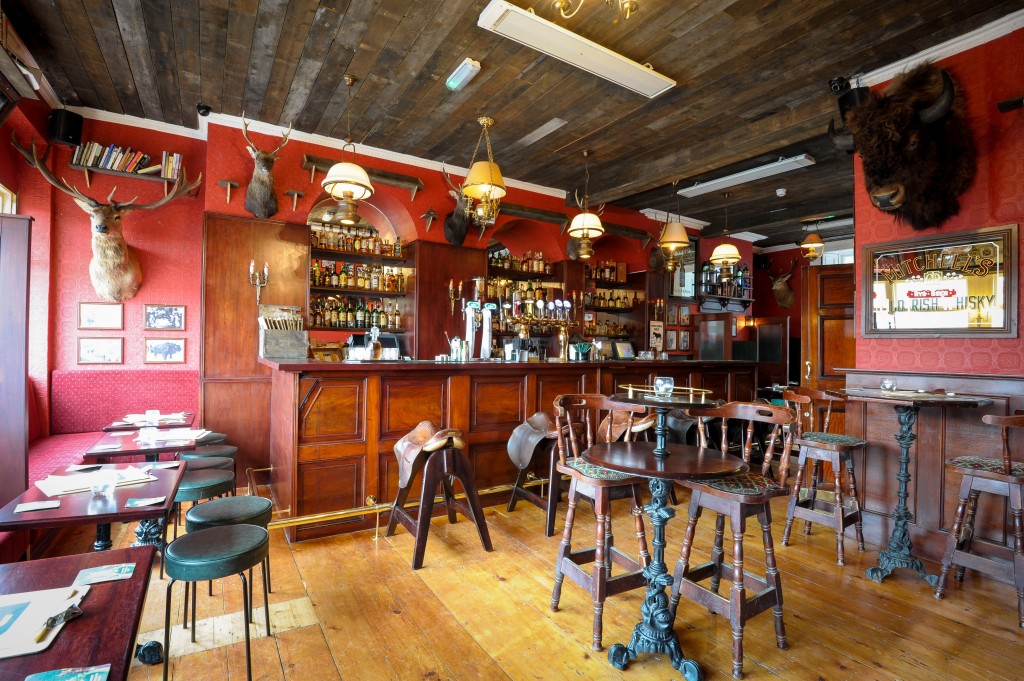 From the wagon-wheel nailed to the wall above the door to the spaghetti-western style frontage, one look at Wellington Quay’s Bison Bar and you know you’re in for serious fun. Saddle up at the bar on one of the wild west stools and take your pick from over 150 different types of whiskey. Next door, the grungy Work Man’s Club and U2-owned Clarence Hotel add a touch of rock ‘n roll to proceedings. 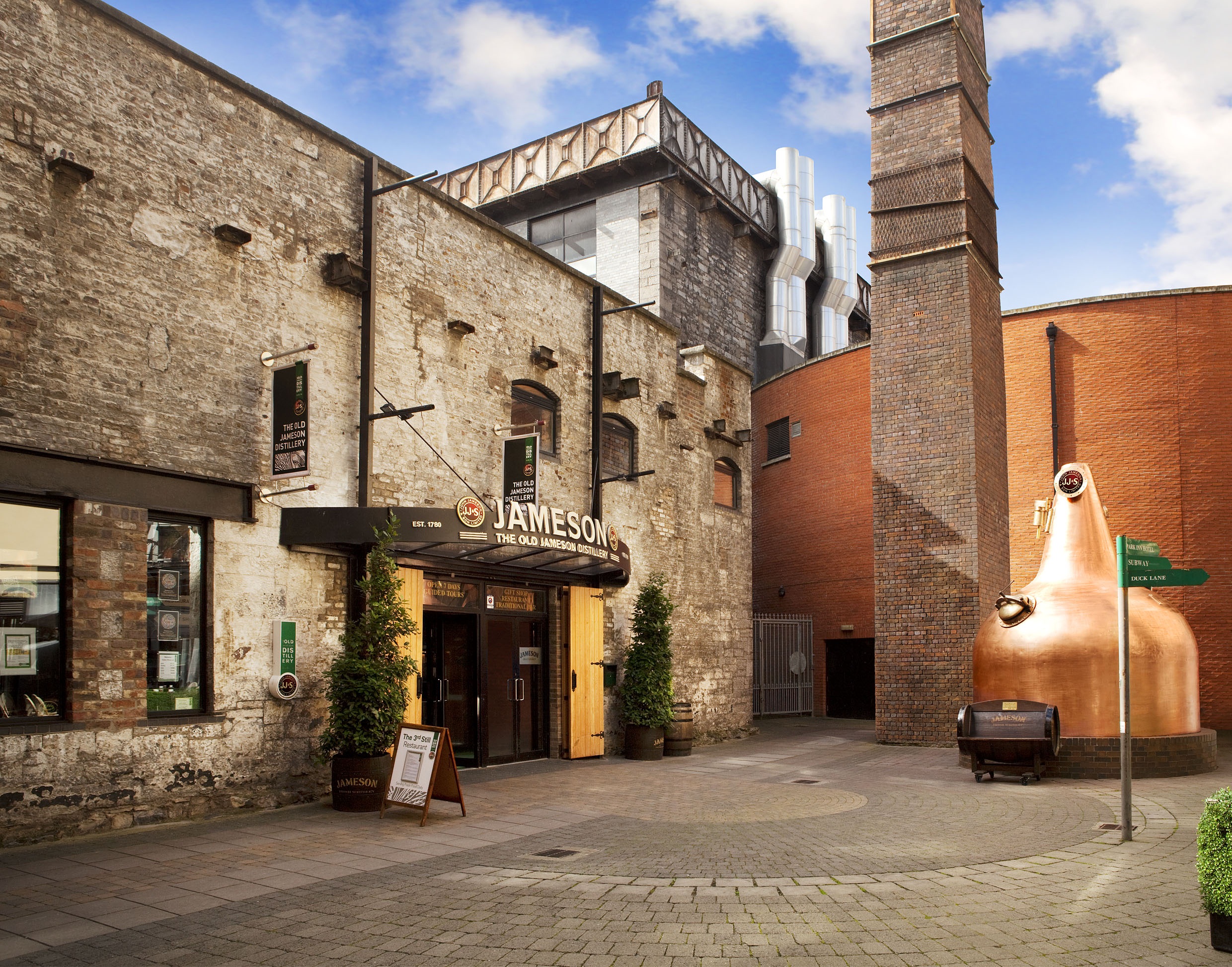 No round up of the best places to try whiskey in Dublin would be complete without mentioning whiskey HQ itself, the Old Jameson Distillery.

Three things that you learn on a guided tour of the Old Jameson Distillery are that triple distillation is the secret to Jameson’s smooth taste, the maturation process takes place in oak wood casks that have previously contained Bourbon and Oloroso Sherry and last (but definitely not least) the alcohol that is lost due to evaporation is called the ‘Angels Share’. That’s right, somewhere up in heaven there are angels floating around with an extra warm glow… 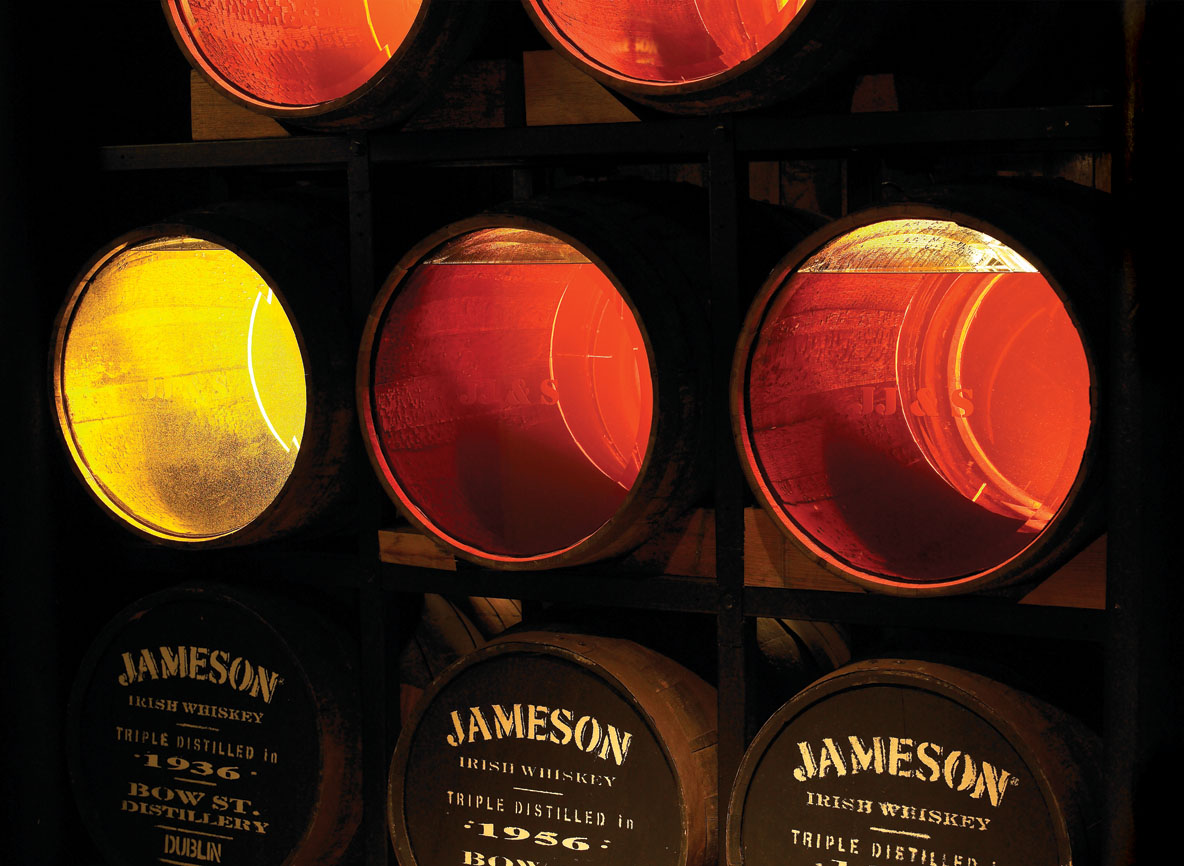 The Old Jameson Distillery is to whiskey what the Guinness Storehouse is to beer.  Just like the Guinness experience you get to sample the goods

At the end of every tour each guest is offered a glass of Jameson at the distillery’s Discovery Bar. Choose from neat, on the rocks or drink it with the latest ‘on trend’ mixer such as ginger ale or cranberry juice.

Dublin’s hottest new late bar may have the tag line “all is not what it seems” but there’s no messing about when it comes to  37’s Whiskey Bar. In a secluded corner to the rear of the building,  37 hand-picked whiskeys await.  Depending on the time of day you’ll be serenaded by either the tinkling of the baby grand piano’s ivories or ambient chilled out jazz from the sound system. In-house whiskey expert Ron Black delivers a service as smooth as the whiskeys themselves, which by the way, are always presented in sparkling crystal glasses. 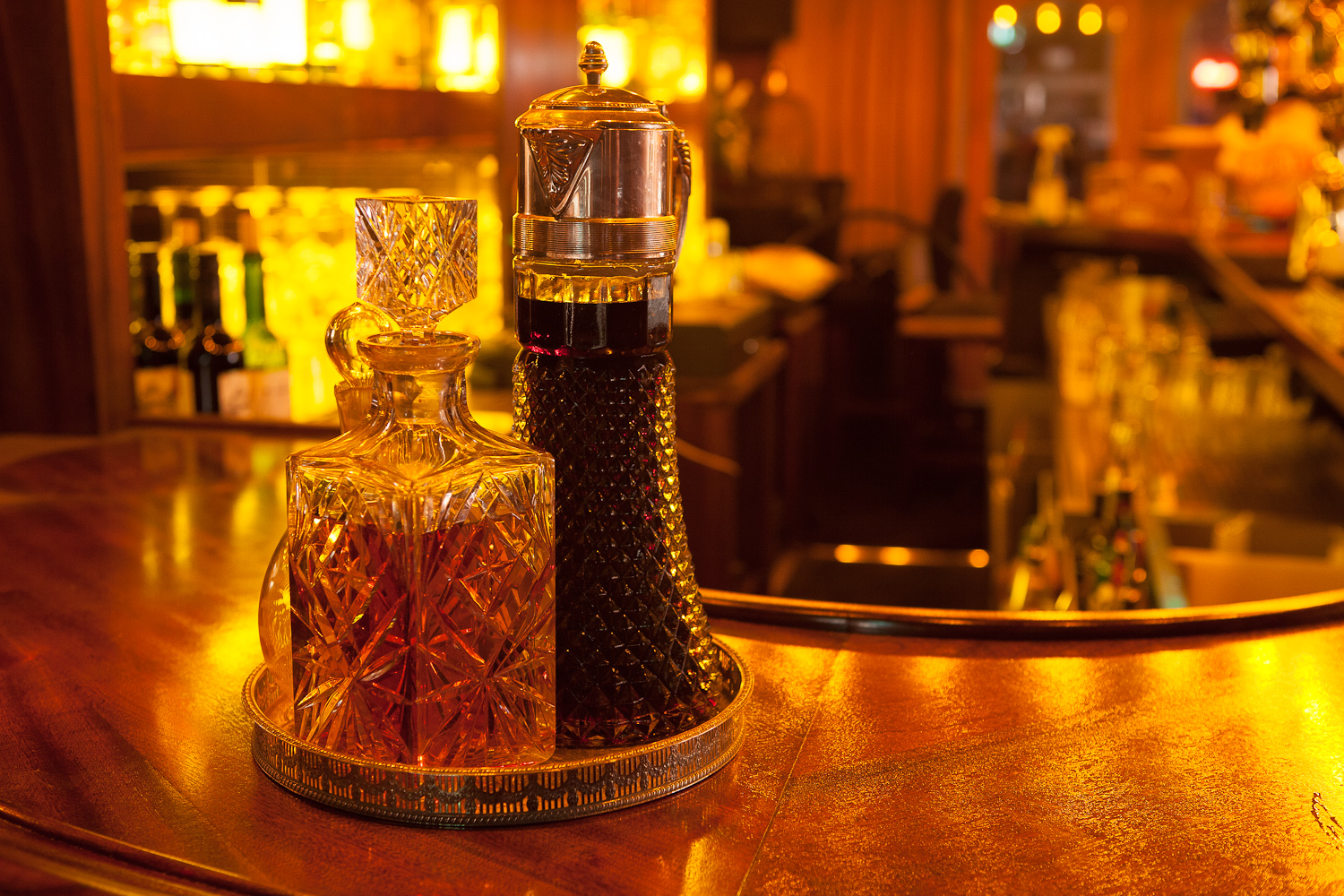 The Whiskey Bar can be reached via the main door, but if you’d prefer to make a low-key entrance, you can sneak around from Anne’s Lane located at the back of the building, just keep your eyes peeled for the sign that says “Whiskey”. If it could give you a cheeky wink it would. 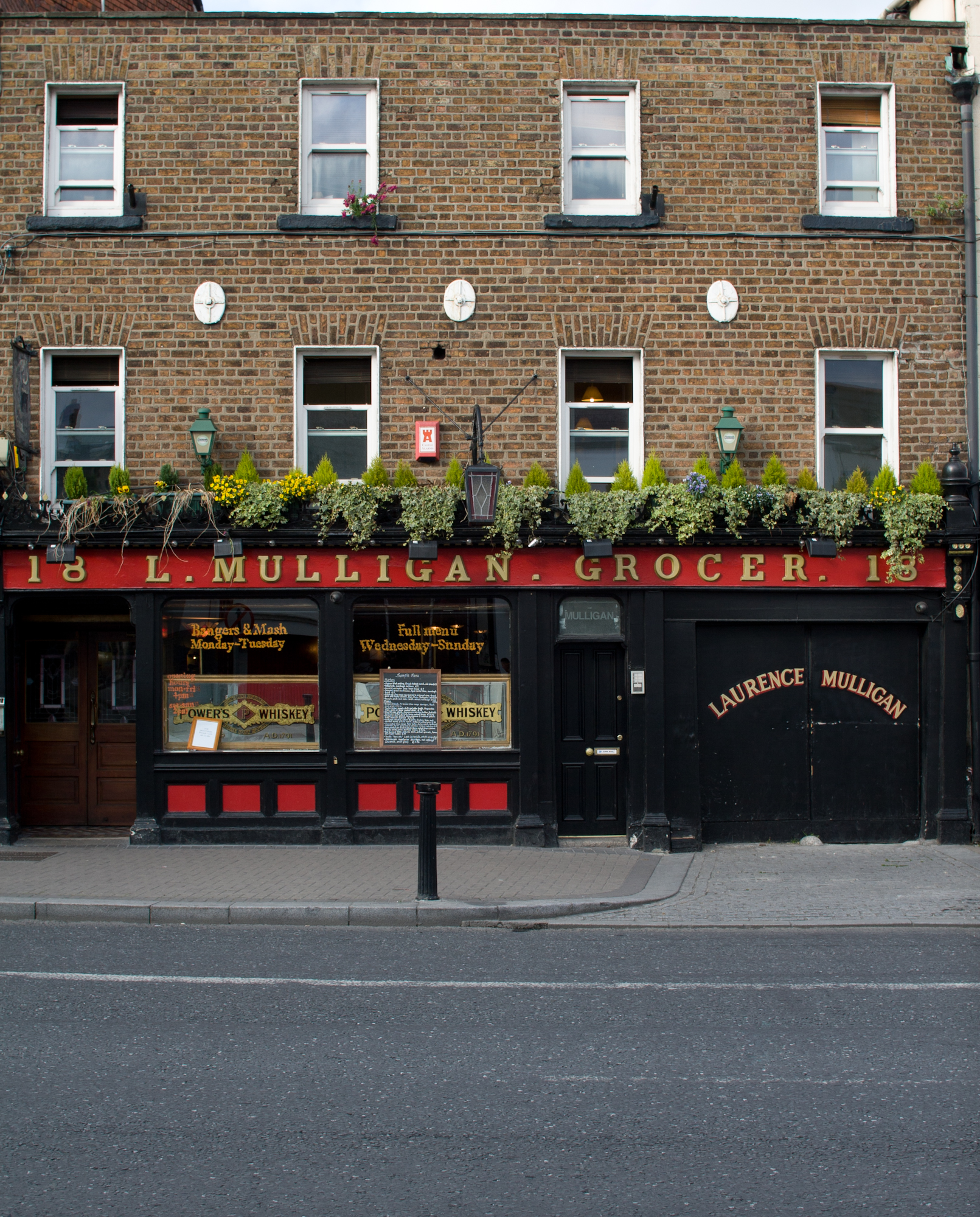 A short walk from the Old Jameson Distillery is L. Mulligan,  a former Stoneybatter grocers that’s paving the way when it comes to craft beer and whiskeys in Dublin.  In excess of 150 whiskeys from Ireland and Scotland as well as a small range of Japanese, Welsh, Swedish and Belgian Single Malts have been personally selected by owner Michael Foggarty. 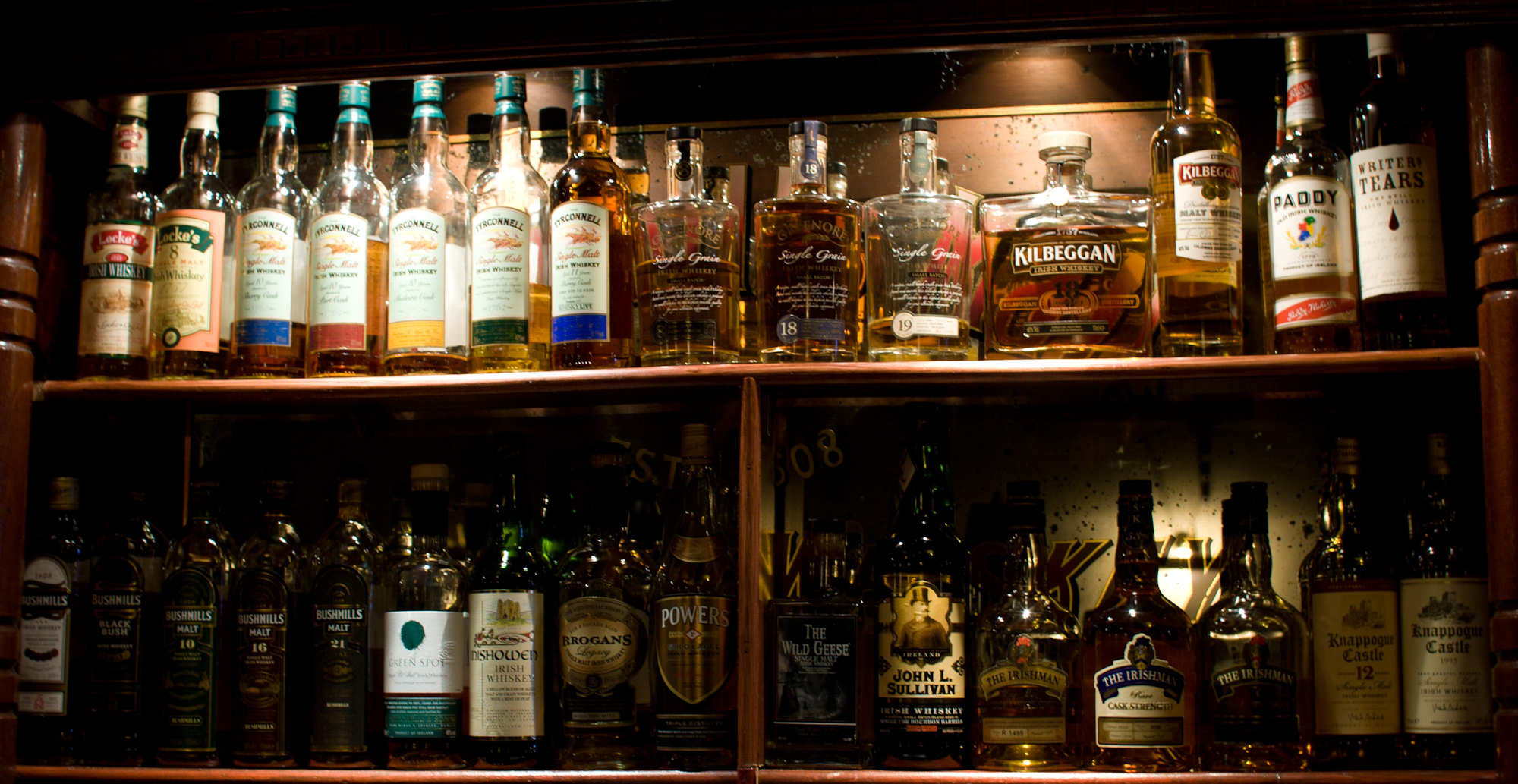 The owners have decorated L Mulligan with its past firmly in mind. Glass jars of boiled sweets keep watch over the bar, while the whiskey range is presented as a menu within an old recycled hardback book –  definitely a novel way to decide on your drink. L. Mulligan’s also stocks each and every craft beer brewed in Ireland so if your taste buds are curious to go beyond whiskey, you’ll be in for an adventure – just don’t ask for Guinness, it’s one of the only bars in Dublin that doesn’t serve the ‘black stuff’.